You may be subject to a New York residency audit. 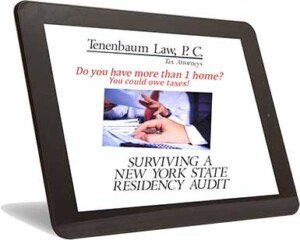 A New York residency audit is intended to establish whether a taxpayer accurately filed a New York personal income tax return as a nonresident, part-year resident, or resident.

The New York Tax Law with respect to residency is complex and nuanced and depends on the particular facts and circumstances of each case. There are two separate and distinct ways of determining whether an individual is taxed as a resident or a nonresident:

A taxpayer will be treated as a resident if the person is domiciled in the State. The domicile test is based on several factors, and looks to determine where the taxpayer’s true home lies: What is the one place to which the taxpayer intends to return?

Even if a taxpayer is deemed to be domiciled outside of New York, he or she may still be taxed as a New York resident under the Statutory Residency Test. Under this test, the taxpayer will be treated as a resident of New York if he or she:

Whether a taxpayer “maintains a permanent place of abode” has been subject to many court decisions over the years, and the definition continues to evolve. The State considers several factors, including:

Regarding the 183-day rule, any part of a day spent in New York counts as a NY day, with some exceptions.

We represent taxpayers who are subject to NYS and NYC residency examinations. Feel free to contact us to discuss your NY residency audit. For additional background information on NY residency issues, download our FREE eBook on SURVIVING A NEW YORK STATE RESIDENCY AUDIT.