One of the few bright spots of the pandemic has been a blossoming of a new bike boom. Cycling in the US has long been a part of a fitness portfolio for many.  With the success of Lance Armstrong, came a proliferation of the spandex wearing pace lining club riders and fund-raising century rides. However, despite spin classes and pelotons everywhere, the bicycle in America has yet to become a fully integral piece in the American transportation family. Perhaps the pandemic has posed a tipping point and the US may be on the precipice of joining the rest of the world where bikes are used to commute, to shop, run errands and most importantly to this blog entry, to tour.  So, with this breakthrough in cycling consciousness in mind, I have been asked by my friend Karen Tannenbaum to discuss the world of Bicycle Tourism.

I like to consider myself an OG (original gangster) of cycle tourism. As a teenager in 1976 I went with 9 other crazy kids and celebrated the bicentennial by cycling coast to coast, from the GW Bridge to the Golden Gate.  This was before crossing the country by bike was, you know, a thing. Bike shorts and bike gloves were still in the future, so cushioning for hands and butts was brutally lacking. Bike shoes? Helmets? GPS, remote speedometers?  You’re kidding, right? Things were much simpler back then, but even today with all the equipment available, the essence of seeing the world from the saddle of a bike is still the same. As the years have gone by, I continued to see the world on two wheels as I have cycled from Quebec to Florida, and in 41 states and 21 countries. So let me introduce you to some of basic styles of bicycle tourism.

Hub and Spoke – This method involves staying several nights in one location, venturing out each day and returning back to the same lodging each night. My wife and I discovered this method when we stayed at two bike hotels in Italy; one in Riccione (on the Adriatic) and one in Lake Garda. These accommodations billed themselves as bike hotels and offered topflight road bikes and guided tours. The hub and spoke method works best when there are several places in a region that are worth a look when you are exploring a large city. The advantage is that you can unpack on day 1 and be liberated from carrying your belongings. The hub and spoke method enables you to really become intimate with an area as opposed to just passing through on a point-to-point journey. There is a definite comfort to returning to the same inn, and after a few days at the end of the ride, you feel like you have come home.   Based on our wonderful experience in Italy, my wife and I came up with the idea of creating a Bed and Bike Inn on Long Island complete with a stable of bicycles and a book of bike routes. Thus, the Stony Brookside Bed & Bike Inn was born.

Point to Point – The attraction of point-to-point cycle tourism is that the journey to get to the destination becomes as important as the destination itself. There is a feeling of accomplishment and bonding with the territory covered when looking at a map of Europe and seeing that you have travelled from Stettin in the Baltic to Trieste in the Adriatic.  Point to point tourism can be broken down into two styles, Supported and self-supported.

Point to Point (supported) This style lets you go from point A to point B without the struggles of carrying your luggage, finding lodging or planning a route. You just ride and enjoy, and the tour company takes care of the rest. Of course, you will pay for this service and it can be expensive. My wife and I used this option in Switzerland where we didn’t want to be burdened with schlepping bags up the Alps and Thailand where the difficulties of language and routing made it wise to hire a guide. Supported tours usually involves signing up with a tour company. There are many out there to choose from. This method is highly recommended if this is your first point to point journey.  My suggestion is to go to a website that is a tour aggregator and sort options by difficulty, level of accommodations, and style of trip. 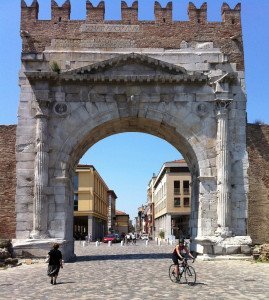 Point to Point (self-supported) – Do you relish the flexibility of planning your own route? Traveling privately?  This option gives you the freedom to go where you want to go, when you want to go, and how you want to go. This is my favorite mode of travel and just last month I took a solo journey from Richmond, Virginia to Jacksonville, Florida following mostly the East Coast Greenway and Adventure Cycling routes.  To go self-supported, you will need a bike sturdy enough to support paniers (saddlebags), spare tubes and bike tools and you will need to be adaptable enough to change your plans based on weather, physical limitations, tail or head winds and the like. Lodging on unsupported travel is part of the adventure and challenge. In my older years I have opted for cheap motels or lodging like Airbnb. One of the beauties of cycle tourism is the appreciation you get for simple pleasures and even a cheap chain motel can feel like a king’s palace after you have been fighting headwinds, heat, road hazards and the like. The problem with relying on sleeping with a real roof over your head is that sometimes there is no lodging when your legs are telling you that they are done. Having camping gear with you gives you much greater flexibility to end a day anywhere.   In my younger days I roughed it in a tent. A tent gives you the option to ditch anywhere, saves on the cost of a long journey and it also really connects you to the outdoors.

There are several organizations that have created route networks that help cyclists go point to point. The most extensive of these networks are the following:

Adventure Cycling – There are four national routes that encircle the US. Two Coast to Coast routes (a Northern and Southern) and two Coastal routes (Atlantic and Pacific) The adventure cycling maps will help you plan your trip but these routes are just suggestions. The routes attempt to guide you to the safest and most scenic cycling passage but they are not comprised of exclusively bike paths.

East Coast Greenway – This organization has mapped out a route from Maine to Florida that links together many of the rail trails and bike routes that already exist. In between these trails the greenway tries its best to place you on roads that are safe and scenic until you get back on a bike path.

Great American Rail Trail – Rails-to-trails has realized the dream of creating a bike only transcontinental route which can be done in its entirety or in pieces. My suggestion though is that you do the route from west to east due to prevailing winds. I also caution that the country is a lot bigger than you think and going from coast to coast is not something to consider casually.

EuroVelo – This is a network of existing bike routes across Europe. We used this when we rode from London to Krakow. The route was often hard to follow because it was really a composite of existing national routes so in each nation you had to adapt to their unique signage. In addition, a prescribed route in Europe is not as m

uch of a necessity as in the US since most European roads are equipped with a separate bike lane.  There is usually a bike route sign from one town to the next. Caution though, European towns and cities are logistic nightmares to get in and out of and getting lost in a maze of roads that were built in the medieval era is part and parcel

own. If you have any questions or would like further information or advice, feel free to reach out to me at info@thestonybrookside.com. I am always happy to help someone get started touring the world slowly from the seat of the bike.

Martin Buchman is a retired history teacher and one of the founders of The Stony Brookside Bed & Bike Inn in Stony Brook, NY, as well as a board member of the New York Bicycling Coalition.